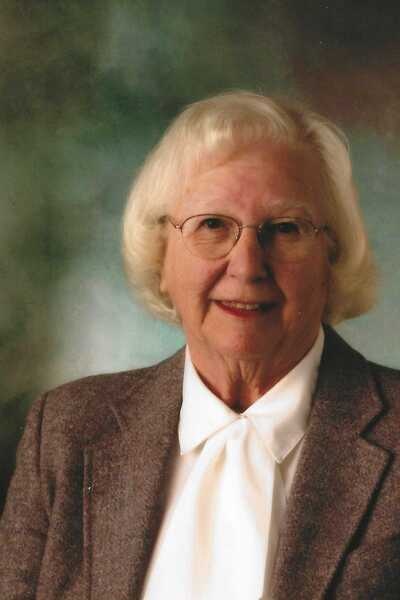 Ruth Morud, age 91, of Dublin OH, formerly of Brandt SD, passed away peacefully at Kobacker House Hospice Care Center in Columbus, OH on January 5th, 2021.  Ruth Ella Lounsbery was born on May 15, 1929, in Centerville, SD to Glen and Mary Lounsbery.  She graduated from Centerville High School in 1947.  In the fall of 1947 she began teaching in a one-room country school in Westreville, SD. She also taught first grade in Brookings, SD, prior to her marriage.  During this time she attended General Beadle State Teachers College (now Dakota State University) in Madison, SD.

Ruth married Eldon Morud, of Brandt, SD on June 13, 1954, and they resided on the family farm in Brandt, SD. She moved into Brandt after Eldon’s death in 1996.  In 2017, she moved to Columbus, Ohio to be near her daughter, Annette Seredick.  Following her marriage to Eldon, Ruth was a homemaker, 4H leader, and substitute teacher. During the final 15 years before retirement she served as the office manager at Deuel County Farm Mutual Insurance Company. Following retirement, she taught piano lessons and was a substitute organist at church.

Ruth was an active member of Highland Lutheran Church, in Brandt.  She was an avid reader and member of a local book club.  She also enjoyed needlework and quilting, playing the piano, and was an extensive traveler. In her later years, she was able to maintain an independent lifestyle with help from her friends at the church and cafe in Brandt.

She is survived by her daughter, Annette (Bob) Seredick, of Dublin, OH; and son, Clair (Sheila) Morud, of Ashland, WI; and grandchildren, Eric Morud, Sonya Morud, and Grant Seredick.  She was preceded in death by her parents, and by sisters Shirley Frick, Ann Sproul, and Doris Mitchell.

A memorial service will be held in Brandt at a later date.  In lieu of flowers, please send memorials to the Ruth Morud Memorial Fund, ℅ First Bank and Trust, Toronto SD 57268.  Funds will be used to support community activities in Brandt, including the women’s breakfast.

To send flowers to the family in memory of Ruth Morud, please visit our flower store.