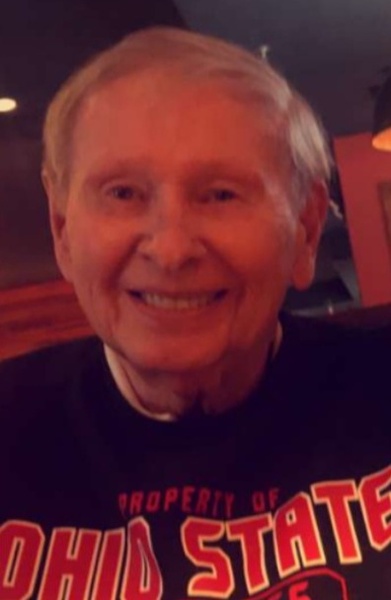 Ronald E. “Ron” Patterson, age 85, a life-long resident of Hilliard and Dublin, Ohio, died at home on Friday, July 30, 2021. Born May 13, 1936, the second son of Edward and Marie Patterson, he was a graduate of Hilliards High School, Class of 1954. (Yes, it was Hilliards. The “s” was dropped in 1961.) He attended Ohio University 1955-57, met the love of his life in 1957 and transferred to The Ohio State University while working at the Borden Company until he attained his Bachelor Degree, Finance in 1964. Ron and Kay were married in 1959 and started their family in 1961. Ron’s professional career was in Retail Management, Business Consulting and Logistical Sales and Management. Ron was a “people person” who especially liked helping the unemployed and under-employed to better their lives through training programs funded by government grants. “Red Tape” was removed through his efforts for many Central Ohio residents. He was preceded in death by his parents Edward and Marie Patterson, brother Don and wife Sue Patterson, infant grandson Dustin Mullen, granddaughter Lindsay Kay Anderson, and sisters-in-law Penny Burwell and Lynne Hudson. He is survived by his beloved wife of 62 years, Kay, his children: Bonnie (Doug) Anderson, Penny Patterson, Ben (Shelley) Patterson, Polly (Duane) Dixon; grandchildren: Sean, Matt, William, Makayla, Georgia, Jadah, Jack and Olivia; great-grandchildren: Faolan, Kieran, Sibeal, Trinity, Evelyn and Lincoln; and his sister-in-law Holly (Rick) Cavallaro. At Ron’s request, there will be no visitation hours but a Memorial Celebration will be held at a later date. In lieu of flowers, please consider a memorial contribution in his name to: Lifeline of Ohio, 770 Kinnear Road, Columbus, OH 43212 or on-line www.lifelineofohio.org. The Tidd Funeral Home, Dublin-Plain City, Chapel, 9720 SR 161, Plain City, OH 43064, assisted the family. Please visit www.tiddfuneralhomes.com to share your favorite memories of Ron or to send your condolences to his family.

To send flowers to the family in memory of Ronald E. Patterson, please visit our flower store.