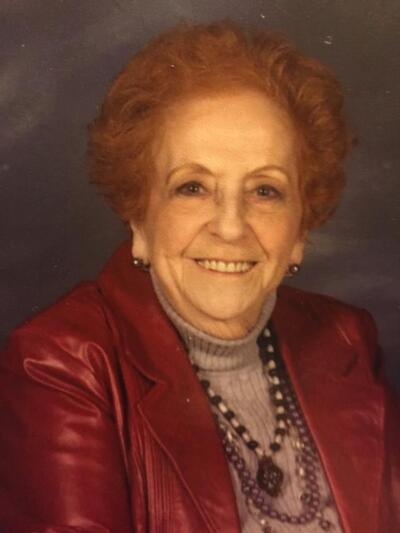 Joan McSavaney Smith died peacefully on October 4, 2020 in Carmel, Indiana. Born July 25, 1922 in Springfield, Ohio to Henry & Belva Cartzdafner McSavaney. For the first two weeks after birth, no one called the baby by any name until someone started calling her Joan. She is only to learn years latter upon needing a birth certificate for college entrance that her parents, who she said had 9 months to think of a name, ultimately left the naming up to her 20-year old sister, Eloise, who named her Georgeann after Uncle George. When she turned 21, she and her sister drove to Springfield, Ohio where she legally changed her name to Joan. The family later moved in 1929 to Summerford, Ohio, a small village in Madison County, Ohio, where Joan graduated from London High School in 1940. In 1944 she married Roger C. Smith in London, Ohio and they moved to Zimmerman, Ohio then onto Dayton and finally in Beavercreek where she and Roger built a house. Later she lived in Worthington and Dublin before moving to Carmel, Indiana for the last two years of her life.

Joan was preceded in death by her parents, sister Eloise McSavaney Kling, brother in law Leon Hurley Kling, brother John Sherman McSavaney and former husband Roger Crawford Smith. She will be missed by her children and their families: Carol Lee Smith Cherry (William) of Indianapolis, Indiana and Casey Crawford Smith (Zoe) of Durango, Colorado, grandchildren Casey William Cherry of Providence, Rhode Island and Caleb Crawford Smith (Sunny) of Houston, Texas. Joan will be missed by her favorite grand puppy, Sally, who often visited her at Green House of Carmel. She was loved by many wonderful friends, colleagues, former students, and those who were touched by her.

Joan attended Ohio University for two years and completed her BS in Education from Cedarville College in 1945. She received her Master’s in Education from Miami University in 1959 and took 54 hours post Master's at Wright State and Ohio State University. Her career as an educator began when she was 18 years old and still in college. She was offered a job teaching 4th grade in Osborn, now Fairborn, Ohio, with a class of 10 girls and 32 boys. When she received this class, the principal informed her the last teacher left as she could not manage the class. During her long and varied career in education spanning more than 5 decades, she taught in Beavercreek and Groveport. Her teaching spanned from first graders to graduate students at Ohio State University, Miami University, Wright State University, and University of Dayton. Her favorite grade to teach was second graders as they had stopped crying over things but still thought that as a teacher, she knew everything. She was an Elementary Supervisor in both Greene and Montgomery Counties, Coordinator of Chapter 1 Services, and Coordinator for Law Related Education Outreach Program. She was a member of Ohio Association of Supervision and Curriculum Development (Chairman of the Research Committee), Miami University Curriculum Advisory Council, Ohio Council of Social Studies (President), and Central Ohio Association of Supervision and Curriculum Development. In Beavercreek she was also a Deacon in the Church of the Brethren and Past President of the Lioness. She was also a member of Phi Delta Kappa, Pi Lambda Theta (Past President), and Alpha Phi Chapter of Delta Kappa Gamma for women educators, American Association of University Women (President), Business and Professional Women (President), Worthington Woman’s Club, Worthington Chapter of the Daughters of American Revolution (Past Regent), and Zonta where she loved to model their clothes to help raise funds for the organization. Joan really enjoyed giving speeches with her favorite topics being on reading, education, travelogues, Native Americans, and First Ladies.

Joan was a member of St. Peter Catholic Church, Worthington, OH where she was active in Parish Council, STARS, and in charge of the Welcome Center for 13 years.

Joan received many awards during her long career including Outstanding Teacher-Beavercreek Ohio, Greene County Educator of the Year, Ladies Home Journal-National Educator, Central Ohio Teacher in the Workplace, Jennings Scholar, Educator of the Year from Ohio Council of Social Studies. She was a member of the Ohio Bicentennial Committee where she had the opportunity to meet Supreme Court Chief Justice Warren Burger. She was also fortunate to meet Supreme Court Justice Sandra Day O’Connor in Washington D.C. while Justice O’Connor was searching for a book for a grandchild of which Joan recommend several to her.

Joan loved going out to eat whether with friends or groups like the Merry Munchers especially when trying out new restaurants. She loved shopping whether in person or over the phone with QVC. Many years ago, she began collecting milk glass pieces and had hundreds of salt and pepper shakers which she paid her children five cents a set to dust. Her family enjoyed camping for several weeks during the summer which allowed them to visit probably all but a handful of states. She loved traveling as evidenced by her adventures in England, Ireland, Argentina, Canada, and Egypt just to mention a few. Joan was active in the theater starting when she was at London, Ohio High School(she was lead in a play where her skirt zipper broke so she played the entire show with her hand on her hip holding up the skirt) and throughout college years and then returning to community theater in London again as a more seasoned actor with plays such as Cut Outs.

When asked about what she wanted people to remember about her she said,” I think that I tried to get along with everyone and tried to be a good listener.

Thanks to all the nurses and Shahbazim at Green House Cottages of Carmel in Cottage 1 especially to Pam, who cared for Joan since admission almost two years ago.

Due to the Covid-19 Pandemic, Social Distancing will be observed and guests are required to wear a facial covering while at the Funeral Home and at the Church.

If they choose, friends may make memorial contributions to St. Peter Roman Catholic Church in her name. Please share a favorite memory of Joan on this website or send your condolences to her family. www.tiddfuneralhomes.com.

To send flowers to the family in memory of Joan McSavaney Smith, please visit our flower store.

Mass of a Christian Burial