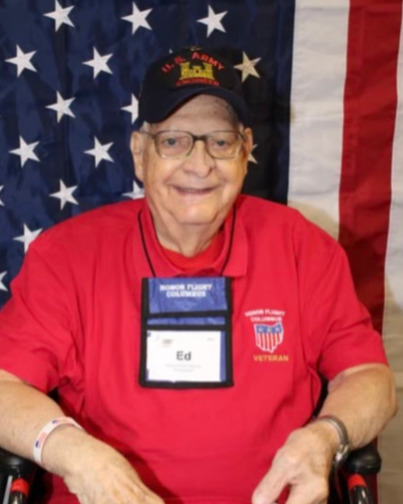 Edward I. Strouse, Jr., age 90, of Westerville, Ohio, passed away Friday, October 28, 2022 at The Gables of Westerville. Born August 13, 1932 to the late Edward I. Strouse, Sr. and Leah Madeline Strouse in Harrisburg, PA, Ed graduated from John Harris High School and Lafayette College where he received a degree in Civil Engineering. He was enrolled in ROTC and commissioned as a 2nd Lt. in the United States Army. Ed was stationed in Germany from January, 1955 until his Honorable Discharge in December, 1956 as a Combat Engineer and rose to the rank of 1st Lt. He joined Columbia Gas System Service Corporation after leaving the Army and retired in 1996. Ed married Marilyn “Sue” Rollins in October, 1958 and were married for sixty-three years before her passing in 2021. Together, Ed and Sue raised two sons, David and Steve Strouse and supported their families as Grandpa Strouse. Ed loved his family and his church family at Grace Polaris Church where he and Sue began attending in 1973. During his years at Grace Polaris Church, Ed served for many years as an usher. Ed and Sue supported foreign missions and missionaries and would host them at their home during home visits. He would later serve with the Grief Share ministry as a member and a leader. In addition to his parents, Ed was preceded in death by the love of his life Sue Strouse and son David Strouse. He is survived by his son and “daughter-in-love” Steve and Michelle Strouse, his grandchildren: Brad (Allie) Strouse, Matt (Samantha) Strouse, Tyler Strouse, Stephanie Duncan; and by his four great-grandchildren: Stella, Ellie, Olive and Ezra; many nieces and nephews; and his wonderful church family. Funeral Services will be held 12:00p.m. FRIDAY, NOVEMBER 4, 2022 at GRACE POLARIS CHURCH, 8225 Worthington-Galena Road, Westerville, OH 43081 where family will receive friends before the service from 10:00a.m.-12:00p.m. Pastors Dan Hammers and Tim Waggoner, officiating. Burial will follow the service at Cheshire Cemetery, Galena, Ohio. In lieu of flowers, please consider a memorial contribution to Grace Polaris Church Global Missions, in Ed’s name. The Tidd Funeral Home, Dublin-Plain City Chapel, 9720 SR 161, Plain City, OH 43064 (614)-733-0080, assisted the family. Please visit www.tiddfuneralhomes.com to share your favorite memories and to send your condolences to the Strouse Family.

To send flowers to the family in memory of Edward I. Strouse, Jr., please visit our flower store.