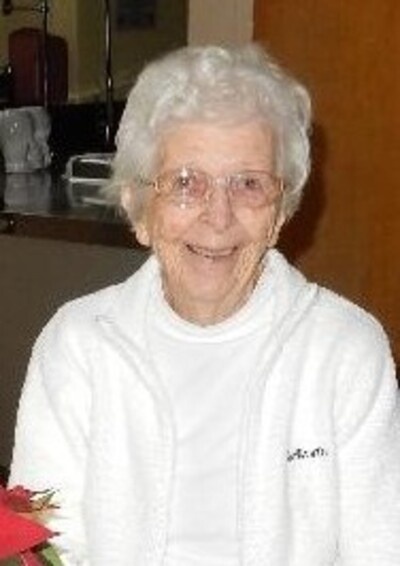 Carol M. (Chiesa) Wisler gently crossed into eternal life on May 20, 2021. She was born in Richwood, Ohio, on December 26, 1925, the second of three daughters to Alfredo and Miranda (Gonnella) Chiesa. Both parents and sisters, Anne Marie and Lena preceded her in death, as did infant daughter, Mary Ann. Carol was born just a few years after her parents immigrated from north central Italy and, while growing up, worked in the Chiesa Homemade Ice Cream and Candy shop, a favorite in Richwood. Carol graduated from Richwood High School in 1943 and attended Capital University for two years. Carol was married to Robert J. Wisler of Galion, Ohio for 73 years and they lived in Bryan for 60 years before Bob passed in 2019.  They owned and operated Wisler Pattern Works, with Carol doing much of the office work. In retirement, Carol took up golf and western square dancing, spending more than 20 years wintering in Florida. Although small in stature, she was packed with spunk, a sharp wit and resilience, living through the Great Depression, World War II, several health issues and raising 5 active sons. She enjoyed spoiling her grandchildren with her special peanut butter Cheerio beehive and Rice Krispies treats.

A private Mass of Christian burial will be celebrated by her family at St. Brigid of Kildare Catholic Church in Dublin, Ohio. Interment will follow in the Fountain Grove Cemetery, Bryan, Ohio. The family requests that those who wish to remember Carol do so with a donation to a charity of choice, in lieu of flowers. Rest in Peace with the Risen Lord, Carol!

Please share your favorite memories of Carol on this webpage or send your condolences to the Wisler Family: www.tiddfuneralhomes.com.

To send flowers to the family in memory of Carol M. Wisler, please visit our flower store.