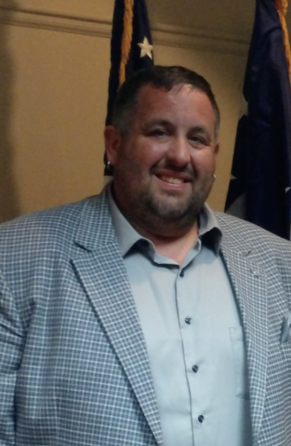 Andy is survived by his wife, Nicole Fraley. His parents Mike and Bonnie Rice; Grandparents Jim and Lois Rice, His brothers Nick Rice and wife Andrea Rice, Luke Rice and wife Tiffany Rice, and brother Beau Rice. Andy also leaves behind several beloved nieces and nephews, close friends and family. He is predeceased by his grandparents Jane and Carolos Montgomery.

Andy was born July 11, 1976. He was a graduate of Hilliard Davidson Highschool, was a certified electrician and worked at Olentangy School district.  Andy married Nicole in December of 2009.  They have two great Danes Colt and Hoss, who Andy adored and treated like his children. Andy was a devoted uncle who loved his nieces and nephews with everything he had. He had a special bond with each one of them. When he spoke of his nieces and nephews they didn’t just include his blood relatives but the children in his life that he was “Uncle Andy” to. He was also a devoted husband, brother and son.

Andy had several passions and hobbies. He poured time and love into his motorcycles and ATV. They were special to him and gave a him a since of pride and freedom. He enjoyed hunting with his brothers and nephews but was also the man who had so much compassion for animals.  Andy had a heart of gold that would give to anyone that needed him. He was passionate about helping and spending time with children who suffered from disabilities.  He was also very involved with his county fair where he served as a member of the Franklin County Fair board.  He was proud of his community and the children who were involved in 4-H in Franklin county and other surrounding areas. Andy’s involvement in the fair and 4-H program lead him to creating another passion of his Next Gen Agriculture.  Through this program he created a way to raise money for children who participated in Agriculture and 4-H.  When Andy Rice did something, he did it full throttle and poured his entire self into it even if it wasn’t popular. He was a wild spirit with a humble heart. He would say what nobody else would say or do what nobody else would do, but always with the best of intentions.  Andy could be fierce but the people close to him knew that he was a giving kind soul. His presence, laughter, larger than life personality and big heart will be missed by everyone who knew and loved him.  His life and memories created will be cherished by his family and friends.

If desired, friends may make donations to NextGenAG through venmo @Lane-Brobst

Per Andrew’s request, please do not smoke by the funeral home entrance.

To send flowers to the family in memory of Andrew Rice, please visit our flower store.